There was a time when I was obsessed with running my first 50k.  And at this time, I didn’t have a coach or training plan or anything. I would just go out and run and run and run.  I hated strength training, yoga, and anything but running – so that’s all I did.

Every Saturday I would pack up my fuel belt and head up to Kennesaw Mountain.  I’d stay out on the trails for half the day.  Beautiful mountain and trails and nothing but challenge after challenge.  I looked forward to Saturday every week just for this.  It was an awesome summer.

So I’ve always wondered why no one does a race out at Kennesaw Mountain.  And just last week, my wishes have been granted!

The Georgia Army National Guard and 122nd Regiment GA-RTI put on a great race to commemorate the 38 of Georgia’s fallen soldiers.  It started with an emotional ceremony commemorating the fallen soldiers.  As my little brother is in the Navy and is always deployed somewhere or another, it almost brought a tear to my eye as I’m always worrying about him and sympathize with other military families.

After the ceremony, it was off to the start.  As I usually fly solo to these things, I actually had my friend Jason, and the husband, Pooky ESQ signed up for this one.  Drinking Club was Friday, so of course Pooky slept in.  Jason did show!  Yay for the Jamaicans!  I made the mistake of thinking it’d be super easy to spot Jason pre-race, as I figured there could only be so many black guys running a race in Kennesaw, GA….however, I was sorely mistaken.  I did finally track Jason down and we found our way to the start.

The Pegasai were reunited for Drinking Club and the Braves game! Of course Lame Lizzie was drinking water, but I wouldn’t want to not live up to my other nickname 😉

They fired  a real gun at the start, and I was apparently too close and not ready as it scared the crap out of me.  There was a long haired shirtless guy in front of me, who was Hippie Dan (if you don’t know who this is, read Scott Jurek’s book) in his younger day in my mind.  Which made him instantly awesome.  Turns out he has a blog too.  I knew he’d win the race, and he did.  So I took off as fast as I could chasing after him.  He left me in the dust, but I held my own.

I burned (I say burned because this is really fast for me) a six something first mile.  The first mile and a half was flat on a paved path to the base of the mountain.  Not too bad and feeling good.  Then the mountain hit.  I tried to keep my pace as much as I could but the mountain had other plans.  The mountain slowed me down quite a bit.  It was so damn steep that my ears popped while I was running up it!!!  There was some poor kid in front of me that I couldn’t quite pass.  So I kind of drafted off his left shoulder the whole way up the mountain. I felt totally bad because he wasn’t wearing headphones and I was mouth breathing disgustingly loud.

Me mouth breathing away.

I didn’t see any girls behind me as we neared the last half mile or so, so I just cruised in on the poor Marine’s shoulder.  When I got to the finish, I realized I was the first woman, and I was pumped!  23:35 was my time.

The poor Marine who I had drafted off of didn’t seem offended at my gross heavy breathing at his back the whole time.  He asked me if I ever thought of joining the Marines… I told him I am not very good at following rules, so it wasn’t a great idea for me to be in the military 😉

Here’s Jason rolling in like the poor man’s Usain Bolt… He rocked it too and I captured proof!

Jason crosses the finish line! But he needs a nickname…anyone?

On to the awards ceremony.  They were phenomenal. I felt like a superstar.  They had a podium and everything!  I got a medal of honor and certificate.  I also got a golden bullet necklace instead of a medal.  It totally rocked. I love a medal I can wear all the time.

The closest I’ll get to the Olympics, and I’ll take it!

Then there was the crem d la crem of the whole thing – the trophy!  It was a piece of wood with a real live hatchet in it!!! The thing was so cool. I also got a reusable grocery bag full of more goodies.

After I made my poor friend Jason hang around and take photos of me (I know it’s vain, but I never have a friend there!!!!)….we went to venture back down the mountain, three mile to the car….

He was a good sport waiting around for me…even when they ran out of water!

I loaded the goodies into my reusable grocery bag and Jason and I walked off down the mountain.  After about a half mile, we were bored.  I proposed we run.  And run we did.  Except that I was running with a  disposable grocery bag on my arm which was full of heavy goodies – including a hatchet.

Eventually made it to the car.  Put my goodies away and then ran a few more miles.

Got home and showed off all my loot to the hubby who was very impressed.  We had a photo session with the swag.  Then we noticed that the hatchet had cut through the bag I carried it down the mountain in.  Luckily it didn’t “hatchet” off any of my body parts 😉 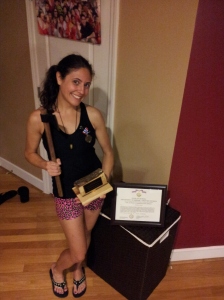 Ok, totally gratuitous shot of me and my swag. Can’t help it. You’d be excited if you got a hatchet too. And even more excited if you made it down the mountain without said hatchet hatcheting you.

All and all a super awesome race!  It was for a great cause, was a great course, well organized and super awards.  A++++ can’t wait for next year!