So here we are at day 2.  Day 2 was 22 miles and a bit tougher terrain than yesterday.  More technical sections than Day 1 and a few intense climbs.

For whatever reason I didn’t sleep great last night.  I slept, but woke up a lot.  Finally I woke up at like 5AM and just didn’t bother going back to sleep.  Now I’m sure most of you get up at 5AM on race day anyways, but me – no.  I usually get up right before I gots to go.  I have only recently started giving myself a few extra minutes to get my act together.

So with a 5AM wake up call and planned departure of 6:30AM…I had lots of time to kill.  OH and lots of time to get SUPER nervous.  I had some tea (you HAVE to try this tea.  I got some loose chocolate (yes chocolate), hazelnut, and coconut teas.  I mix them together and steep with water and stevia.  OMG.  Best. Thing. Ever.) 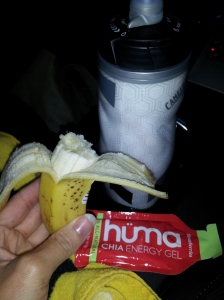 I forgot to take lovely pictures of all of my tea, food and provisions as I usually do…so you’ll have to be content with banana and Huma (which, if you haven’t tried is the most awesomest and natural “gel” product yet!)

So had my tea.  Had the muesli again.  God that stuff is good.  Put on the outfit – secret to success – this new body glide type stuff – its called Mission Skin Care.  When I run long distance I usually get this huge “wound” (I have no other name for it – ask my husband) where my sports bra band goes, in between the Girls.  Its horrible.  It was  a huge concern of mine going into stage racing.  Would I be able to stand the sports bra wounds over so many days?  Well – two days of using this stuff – and no wounds!  First time ever!!! I also used it on my armpits and no chaffing! I also lubed the feet up with some liquefied body glide powder and wore my Injinji toe socks – and no blisters or hot spots after two days!  Despite multiple water crossings today – including knee deep!

Yep. Brand spankin’ new prior to Day 1. This is becoming a MG tradition.

YEP.  I wore brand new shoes for the stage race.  Liz strikes again.  I just can’t help myself.  I really wasn’t happy with any of my trail shoes and couldn’t think of any I would want to run for three days on – especially on some rockier trail.  So I did a quick little google search on my phone – in the car – on the way to the airport Sunday (yes, as in Sunday the 9th) and came across these Inov8 Roclite 226s.  I love Inov8s and have a few pairs.  But none I love for technical trail running.  I had tried on a few other pairs in stores, but they were all too stiff and none had zero drop.  Then I saw these on Amazon.  SOLD.  I ordered from my phone with one day shipping and had them Tuesday night.  Didn’t have time to try them out but figured Day 1 was as good as any day to try them out.  And I was right.  LOVE these shoes. 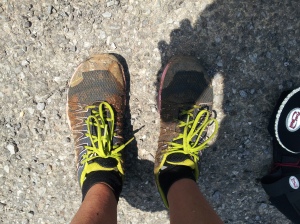 They looked even better after a whirl in the stream crossings and mud!

OH and one more Day 1 issue resolved!!!  The duel belt issue!  I wore my sweet Swim Bike Mom tri top today.  It had handy pockets in the back. One held my phone and one held my gels!  Perfecto!  So just had to wear the fuel belt and alone it felt great! Yay!  Oh and seriously, these tri tops are so comfy!  Mines a bit small (see it rolling up in each picture) but as soon as I get rid of my HR PufnStuf gut, it will stop rolling up.  Oh –it also has the awesome UMG logo on the back.  Yay! 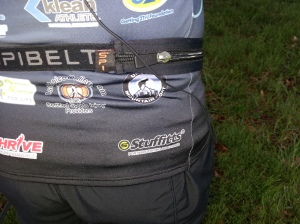 Jamaican Sensation was kind enough to take this at Scenic City. He smoothed out the rolling issues for me so you could see the tiny goat and corresponding love handle 🙂

So back to the story…I went to the bathroom two million times (anyone else do this pre-race?  totally annoying)…and packed my crap and headed out.

Getting to this race was fun.  A totally twisty mountain road.  The kind of road that I was meant to cruise in my little beamer.  So much more fun than driving in the ATL.  I was twisting and turning and the view was awesome. Should’ve been a fun time – but for some reason I was ridiculously nervous.  I mean ridiculously.  I was feeling tired and all sorts of doubting myself.  I had myself SO worked up.  Deep breaths.  Deep breaths.  Why am I so worked up?!  I drive myself nuts sometimes.  Sigh.

Yes, I took a picture of the road. Wouldn’t want you guys to miss a stray detail.

Pre-race I met two other people from the ATL.  One was one of my DailyMile friends Alex. Him, his dog and the Misses were awesome.  Some chit-chat…two bathroom trips (yes, only two!  That’s all I had time for…) 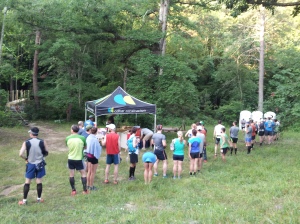 And then we were to the start.  I tried to start a little further up today.  Even though I wasn’t feeling confident and was feeling tired and nervous – I was worried about the cutoff and didn’t want to get stuck.  Turns out Alex was right in front of me, and off we went.

At the start!  Alex behind in gray!

The course was beautiful.  Shaded and lovely.  There was a waterfall too!  A few miles in there was this crazy cliff to climb up which required hanging on to a rope and pulling yourself up.  Slow and steady and bottleneck time.  After that was sweet rooty single track so more bottleneck. But after that, this race really spaced out.  I had lots of time to myself (which you know I love) and I hobbled along quite nicely.  At the beginning – maybe the first 30-40 minutes, I was still nervous.  I thought I was tired and out of breath too early. Still freaking out.

Long line through the tree!

One of my fellow runners was nice enough to take my picture 🙂 Thumbs up in full effect!

But then, as always, I settled in, found my groove.  And then started loving the day.  Before you knew it, I got to this insane up hill.  I came upon a bunch of people and it was another bottleneck.  It was a crazy hill. When I got to the top, I actually had to pause to catch my breath – even after power walking.  BUT at the top was an aid station with popsicles and potatoes and salt to dip them in!  Heaven for a Liz!  I was loving it.  I even took my time and ate all of the above and took pictures of the view.

View from the top!

I kept on keeping on and came to a sweet guy named Ken with some spiffy red glasses and an Xterra shirt (that’s how I should’ve known we would get along!) and he was so nice!  He helped me across some slippery water crossings and even shouted to me when I went the wrong way!  Nice save Ken!  I love trail runners.  They are so awesome.  Going up the crazy hill before the aid station, another gentleman offered to help me when it appeared I lost my footing (luckily I saved myself).  All I can say is chivalry is not dead – at least not on the trails.

Ken and I eventually got to the main aid station at the start/finish area.  We were told we only had 6.5 miles to go!  Woo hoo!  This was at about 3 hours in.  Wow.  We were cruising.  This was great.  Ken sped up a bit.  I didn’t see him again.  I figured he’d sped off.  I would later find out he got lost and had a detour – however he still finished well under the cutoff!

Coming down off the bridge at the last aid station. A face only a mother could love.

So I hoofed it onwards alone.  I caught up to a small group and Alex was in there.  Reunited we hauled it in the rest of the way.  We had to go back DOWN that crazy cliff with the rope.  Let me tell you about going down that thing.  Good grief.  Alex and I agreed we were both klutzes and had the goal to finish without falling and hurting ourselves (or dying over the side of the cliff) so we took it nice and slow.  Made it to the bottom and wife and dog were there taking pictures 😉  So sweet.  We were rewarded with views of a lovely waterfall. 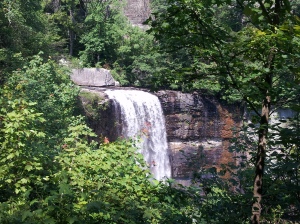 To the victor goes the spoils! Beautiful views!

The rest of the way in was a little tricky with lots of rocks and roots so it was slow goings…OH yeah, and then there was that knee deep creek that had to be crossed before we trucked it in.  Lots of slippery rocks and I went through it like a wuss – all the while screaming –I cant fall in, my phone’s in my pocket!  And I did it – I didn’t fall in (although it would’ve been awesomely refreshing!)

Still wussing it out… 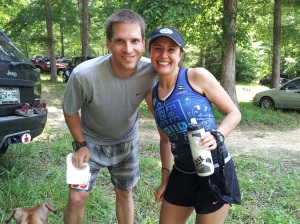