So today was day one of the TransRockies…a six day stage race across the Colorado Rockies (hence the name)! (If you’re wondering about the madness leading up to the race – including taper insanity… well, I have posts about those, but they are for later, when I have the energy to finish them…one day soon…)

The course wasn’t very trail-ish to me – lots of hard packed dirt and sand double track.  A few steep climbs but lots of nice small rollers…and breathtaking (literally due to the altitude) scenery.  It was amazing.

My piss poor photography does not do it justice!

I had been completely fretting about the altitude and the effect it would have on me during the run.  I hadn’t felt too bad since arriving in Colorado ….but was feeling a little wooziness here and there.  And well the lungs … you know… I was hypoxic!  Panting like a dog…

Our team name: Hypoxic Mountain Goats… get it?!

The first two nights we were here, I slept like a rock.  However, come Monday night…I woke up every hour and tossed and turned.  Eh.  So I got up a lot earlier than planned, made me and Pooky some oatmeal, bananas, and tea, and set about going to the bathroom about eight hundred times (not an exaggeration).

Found some great gluten free oatmeal packs and topped them with almond milk, banana and blueberries!!! Side of Vanilla Hazelnut tea and electrolyte drink…

…And I also made my sherpa breakfast in bed!

I got ready and Pooky dropped me off at the start, where I had a mini-clothing crisis, then went to pee and got some water.

I then saw my partner, Heather, and her two friends, Seth & Dan, and we took some photos.  One more trip to pee and then…we were off!!!

I felt good going out.  My legs were fresh but the lungs were burning.  Me and Heather fell into an even pace as we headed out on pavement.  After not too long we got to the trail and it bottle necked up hill.  It was a good forced slow down early on.  There was really no need to try to waste energy jockeying around people on this pass so we just power hiked it and enjoyed the views. 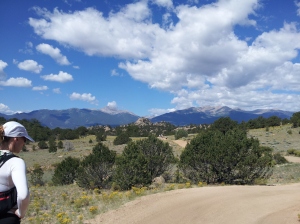 My photos aren’t great, but the views were – I swear!

Eventually it evened out and widened to double track and we were trotting along.  We kept a good consistent pace together and the miles ticked by quickly. 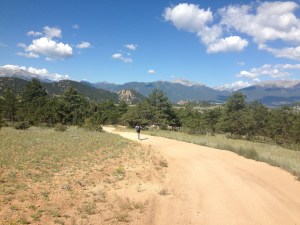 Heather took an “action” shot of me!!! Can you spot the tiny goat in the picture?

I know this day was the easiest and luckily it felt that way.  It was a nice “ease in” to the race.

Heather and I got along great for being strangers until that point, as she seemed pretty similar to me.  She’s a super Iron-woman triathlete type so I was a bit nervous about the match up with granola trail hippie me…but we got along good.

We made sure to keep up on our hydration and nutrition and were good about reminding each other.  Heather was also very good at reigning us in and making us walk and take it easy.  Something I am not typically very good at, so I’m sure this will pay off in the later phases of this when this thing really cranks up (wait until you see the elevation charts for stages 5 and 6…meh.

Today was 2,550 feet of climbing topping off at 9,339 feet.  20.9 miles total.  All and all it was gorgeous weather – super sunny and cool humidity free air (which coming from the most humid summer of all time in Atlanta, this felt SO good.  SO good).

Coming down the home stretch there was an end on a paved road of like 3-4 miles of “false flat.”  This was pretty awful.  The sun beat down and it was boring and hard pavement.  We used a little game where we ran from landmark to landmark and then walked a bit.  The highlight was Pooky drove down to see us!!!  I was nervous he’d hit a runner, but he snapped some photos of us and was on his way back to the finish. 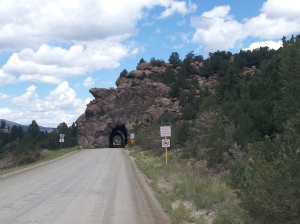 Besides Pooky, there were also some amazing rock caves!

On the last mile or so, it started to rain and get colder.  By the time we finished it was raining pretty good.  And pretty cold.  Dan and Seth had finished a bit ahead of us and were waiting with Pooky.  We snapped a quick pic and then Pooky loaded us up and drove the crew to camp.

Now full disclosure … as part of this race, you camp out.  The race transfers your luggage, sets up your tent, and provides catered food and a shower truck, massage tent, etc.  That being said, I’m copping out.  I’ve sold out.  I’m staying in hotels.  There, I said it.  I admitted it.

You see, it started I was going this alone with my partner.  In such case, I was going to stay in said tent city.  Then at some point Pooky decided he wanted to come.  And he refused to camp.  So I had to book him hotels in each locale and a rental car.  It was somewhat expensive…and the more I thought of it, if I was shelling out all this cash, might as well make it a vacation and stay in the hotels with Pooky.  Plus, who am I kidding?  I don’t camp.  I mean I could, but why would I when I have Pooky and a warm bed back at the hotel. 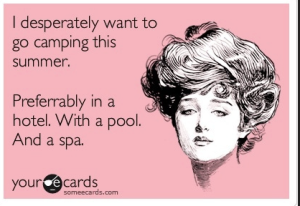 I felt super guilty and like a fraud, but as Pooky pointed out, who am I trying to impress?  What am I trying to prove?  He was right.  No one.  Nothing.  I’m here to have fun, and having the husband and a hotel infinitely improve that.  So there.  I said it.  I admitted it.  Go ahead and hate on me for being a pampered running diva.

We finished it out better than expected – especially considering we really took it easy and walked plenty.  4:21.  Turns out we were 5th of 15 teams in the women’s open division!  SO that was a pretty cool surprise.  Even if it only lasts through today 😉

After dropping off the teammates at camp, I went home and filled the tub with ice …. and suffered it out while enjoying a recovery drink and some Facebook on the phone…

I then followed up with a shower and some grub.  And most importantly, a chai espresso gluten free hipster macaroon.  It was amazing.

This is for you E!

Got a 15 minute massage at camp, and Pooky found a basketball hoop where we shot hoops for a while.  Wasn’t much else to do around, and the friends were napping so we headed back to the hotel. 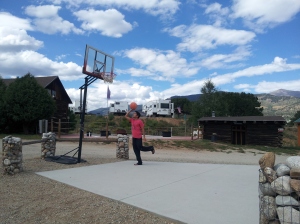 I decided against going to the dinner and ceremonies at night.  I’m super picky on food, and would rather do my own thing. I felt bad like I should go socialize and enjoy the camaraderie, but oh well, I never have before, so why start now.  I went back to the hotel and packed up all my stuff for the hotel change tomorrow.  I prepped breakfast and my hydration and fuel, set out my outfit and charged everything up.

We found this fancy-ish Asian restaurant in town and had a huge feast. I was way more hungry than I realized.  This feast also involved a flourless chocolate cake to end it.  Mmmmm mmmm.

Then I came home and conjured up the energy to blog.  Hard as it may be.

Thats why I powered through to write this for you 😉

Feel bad I don’t have better pictures for you all but me, Heather, Seth and Dan all took pics and decided we would share them later and all the ones Pooky took were on the real camera which I don’t have the cord for right now…so photo album later.